About the Rodell Wisconsin

And about The Rodell Wisconsin School

The Rodell Store and Rodell Tavern are now non existent businesses that were between Augusta Wisconsin and Fall Creek Wisconsin.  The bar and store were closed in the 1990's as local bars began failing due, among other things, to the life savings restrictions imposed by ever tougher drunk driving laws.  What was formerly the Rodell Bar and Rodell Store, are now residences.  The former Rodell Tavern and store are less than 400 yards from the former Rodell School. 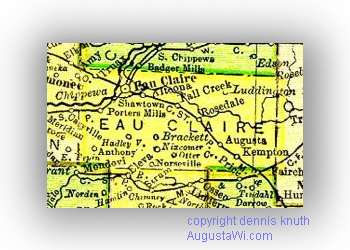 Rodell Wisconsin is unincorporated and has about 5 residents in 2010

Rodell Wisconsin was once a passenger train stop

Rodell WI was once known as Rosedale WI

Rodell Wis is in Eau Claire County which is in West North Central Wis.

Come Visit Wisconsin.  We'd be happy to see you.